The following story was published on the Canadian Golf Traveller blog. Written by Brian Kendall the article discusses why he rates Wesbild’s Predator Ridge among Canada’s top two or three golf resorts.

Early in the summer of 2012, Links Magazine, an American golf publication, listed its top 10 Canadian golf resorts. Though overall it wasn’t a badly done list, as a Canadian writer who has visited virtually every leading golf property in this country, I did have a serious quibble. How could they possibly leave out British Columbia’s Predator Ridge Resort?

But let’s back it up a bit before I make my case. Here, as listed, are Links Magazine’s top 10 Canadian golf resorts:

Like I said, they’re not bad choices. Cabot Links, Canada’s first true links, is the most exciting golf property to open in this country in decades. Fairmont Banff Springs and Fairmont Jasper Park Lodge are also no-brainers; both rank among the finest golf properties not just in Canada, but the world. As the home of the now brilliantly rejuvenated Highlands Links, one of the jewels of the Canadian game, Keltic Lodge Resort and Spa also rightly belongs on the list (though the accommodations need an upgrade). So, too, does Rodd Crowbush Cove and Beach Resort, home of the Links at Crowbush Cove, an acclaimed Tom McBroom design that ignited Prince Edward Island’s golf industry after being named Golf Digest’s best new Canadian course of 1994.

But Predator Ridge Resort surely ranks ahead of at least one — and maybe all — of the other selections. 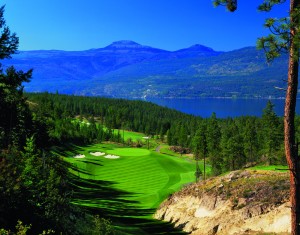 Built at a cost of $10-million, Carrick’s 7,190-yard design seamlessly blends eight completely rebuilt holes of Predator Ridge Resort’s old Peregrine course with 10 spectacular new holes carved through rugged mountain terrain offering cliff-top tee shots and panoramic views of Lake Okanagan far below. Though visually intimidating, The Ridge’s fairways are wider than they at first appear, with dramatic mounds and slopes to help funnel errant shots back into play.
Particularly striking at The Ridge are the dozens of mountain rock formations that have been scraped clean and power-washed to make their colours and striations more vivid. It’s a robust and uniquely Canadian design technique that the Toronto-based Carrick perfected at his award-winning Muskoka Bay Club in Ontario.

What thrills and amazes me every time I visit Predator Ridge is the feeling that I’ve entered a kind of golf heaven. The red hills of the Okanagan Valley, a landscape Mother Nature made especially for golf, roll endlessly toward the horizon. From sunup to sundown, golfers can be seen pounding balls at the massive driving range set in the valley beneath the main lodge. Though the resort offers a spa, pool, gym and other amenities, they’re merely distractions until your next eagerly anticipated tee time.