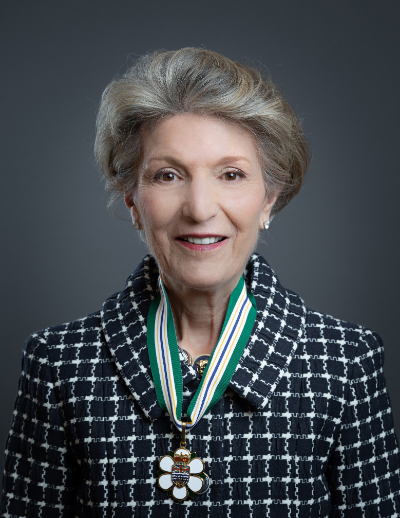 As co-founder of Wesbild, Mrs. Khosrowshahi has been a tireless supporter of important cultural, educational and social programs that have enriched the lives of British Columbians and made a significant difference in her community in a multitude of ways. She is a founding board member of BC Women’s Hospital Foundation, former chair of the board of directors of the Vancouver Symphony Orchestra (VSO) and a VSO honorary life vice-president. She has been a governor of Simon Fraser University, an honorary governor of the Vancouver Foundation and has served on the boards of Lester B. Pearson United World College of the Pacific, the National Gallery of Canada, the Museum of Vancouver, CBC/Radio-Canada, York House School, YVR Art Foundation, the Nature Conservancy of Canada and the Aga Khan Museum.

As expressed by the Order of British Columbia in its appointment announcement:
“Khosrowshahi is a convenor, a force and a doer. She gathers key people from across sectors and gets them to work together toward the public good. She is a role model for countless women, including young Persian-Canadian women. She listens, acts and builds bridges across social, economic and political lines.”