The City of Coquitlam announced today that outdoor enthusiasts are already enjoying the new and upgraded trails, amenities and park spaces at the expanded Harper Park on Burke Mountain, with improvements funded entirely through the nearby development.

Major changes at the nature park off Harper Road in the Smiling Creek neighbourhood have been under way since 2019, including a 4.4-hectare (10.8-acre) extension west of the 6.6-hectare (16.2-acre) park, and about $1.5 million in improvements by area developers, Wesbild and Infinity Properties, whose residential projects border the park.

While the work has approached completion over the last few months, hikers and walkers have been out exploring the new trails, bridges and other amenities as they have become available. The final touches, such as plantings and interpretive signage, have been installed this week.

“The Harper Park project is a great example of how we are leveraging growth to bring benefits and improved services to the community,” Coquitlam Mayor Richard Stewart said. “This is a great addition to Coquitlam’s natural assets, and gives our residents even more opportunities to enjoy the physical and mental health benefits of exploring the outdoors.” 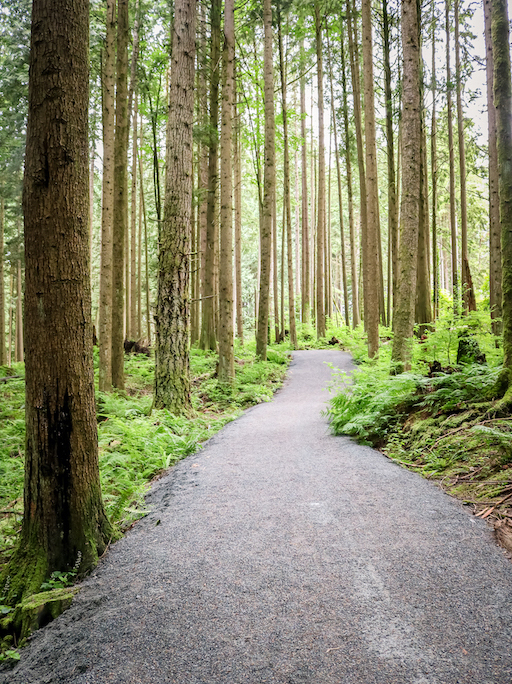 The agreement reached with Wesbild and Infinity Properties has brought one larger, improved passive park to the growing Smiling Creek neighbourhood, rather than two smaller parks previously planned for the area.

The City owns the park extension site, but over $1 million in improvements were funded and built by Wesbild as part of $4 million in community benefits it is providing to develop housing south of the park.

“We are really excited about the addition of this natural park to the community of Burke Mountain,” Wesbild Senior Vice-President Development Lilian Arishenkoff said. “This is the fifth park Wesbild has built in partnership with the City of Coquitlam on Burke Mountain. Parks are key to creating community and we believe the Harper Park expansion is truly special with its natural features and historical legacy.”

About $450,000 in improvements to the original park footprint have also been funded and built by Infinity Properties as part of its agreement with the City. Infinity’s contribution has included significant trail upgrades, construction of two pedestrian bridges, native plantings and seating.

“At Infinity, we believe in creating Authentic Places that enhance livability,” said Josh Turner, Development Manager for Infinity Properties. “The opportunity to help improve the outdoor amenity space at Harper Park is a perfect example of how our team was able to enhance the area through the improvement of natural spaces for local residents to enjoy.”

The expansion project retains most of the natural forest and highlights Burke Mountain’s logging history, railway and forest features:

Burke Mountain was logged throughout the first half of the 20th century, facilitated by increased railway access in the 1920s. One of the original railway beds, named the Flywheel Trail, is still visible. The historical significance is recognized by a railway-themed pathway, and an interpretive sign highlights the area’s logging history.

Logging operations on Burke Mountain began in the early 20th century, when Dr. Robert Dollar extended a railway line from Port Moody to Burke Mountain. The railway extension crossed Hyde Creek and Coast Meridian Road, before following what is now known as Harper Road. The feature trail of the park is built on the remnants of this line.

The mature forest that towers over visitors is an example of the resilience and richness of the ecology of Burke Mountain. Clear-cut logging and fires in the early 20th century removed most remnants of the old growth forest, which included some trees over 1,000 years old. An interpretative sign detailing the forest succession on Burke Mountain is located in the park beside a heritage stump.

The original Harper Park site can be accessed off Harper Road or the north end of Argyle Street. Access to the extension to the west is provided from Highland Drive to the south, and along the Harper Road multi-use pathway along the north-east boundary.

Additional information and project updates are available at www.coquitlam.ca/parkprojects.